In 1940, oil was discovered in Hamilton County.  Considerable reserves were found in the areas around Hoodville and Dale.  While the volume of crude oil was substantial, the presence of butane spurred the construction of a new refinery.  Investing $3,500,000, the Texas Company began construction on March 26, 1942 with operations commencing in December of the same year.

The casing-head gas plant produced butane, isobutane, propane, iso-pentane, and pentane-plus from 1942 to 1964.  In 1943, the Dale-Hoodville Consolidated field in Hamilton County yielded an estimated 7 billion cubic feet of gas with 6.2 billion cubic feet processed at the Texas Company's Hoodville refinery.  A study from 2003-2005 by the Department of Energy and the Illinois State Geological Survey on the "CO2 Sequestration and Enhanced Oil Recovery Potential in Illinois Basin Oil" modeled the Dale Oil Field and identified a potential for 15% additional recovery of resources.

Butane gas was utilized to produce high octane aviation fuel for the United States fighters and bombers used in Europe and Pacific theaters during World War II.  Jimmy Doolittle championed the development, production, and stockpile of the specialized mixture.

In May, 1941, the Sohio Pipeline Company completed a 25-mile, six-inch high pressure pipeline from the New Benton Field to Hoodville.  It also installed a line to the Dahlgren Pool in Hamilton County.  It is not clear if these pools were connected to the Hoodville refinery.

Drip gas is a low octane fuel formed from condensate from oil and gas wells.  Nearby residents used the fuel in their cars, trucks, and farm equipment.

Ed interviewed a 91 year old man whose family lived near the refinery.  He said that they could farm 24 hours a day as the flares lit the sky and it never got dark.

Gas from wells was pulled by vacuum pumps through a 24-inch pipeline to the refinery for processing.  Since electricity was not available in the rural area, a second, smaller pipe sent pressurized gas back to the field to operate the pump jack motors.

Bob Sturm was contracted by the Texas Company to remove the pipes that had been installed in the ground at the facility and across the farm land to the oil fields.  The primary concern was safe removal and restoration of the land for continued use by the owners.  His son Tom assisted in the removal and has provided many details about the activity at the site.  Approximately 500 miles of pipe were removed from the location.

The compressor building contained five 6-cylinder Fairbanks-Morse engines.  The vertical cylinder engine shared a common crankshaft with a horizontal cylinder gas compressor.  Each had 6 power pistons.  The engines operated at several hundred RPM and could be run even if a cylinder was out of commission.  The air cooling towers were constructed of redwood.

The L&N railroad built a 10-car, 687.5 foot siding at the refinery. Some schedules have the location named "Havoline".

The refinery provided jobs for local residents and improved the economy.  The refined products fueled the fighting forces overseas and helped alleviate the energy shortage at home.  With this page, we remember those that drilled and maintained the oil wells and equipment, built and operated the refinery, checked the meters, wound the timers, replaced the chart recorders, rationed materials, and restored the land to preserve our freedoms and way of life.

Oil and Gas Development in Illinois in 1943, By Alfred H. Bell and Charles W. Carter

How Important Was Oil in World War II? by Keith Miller 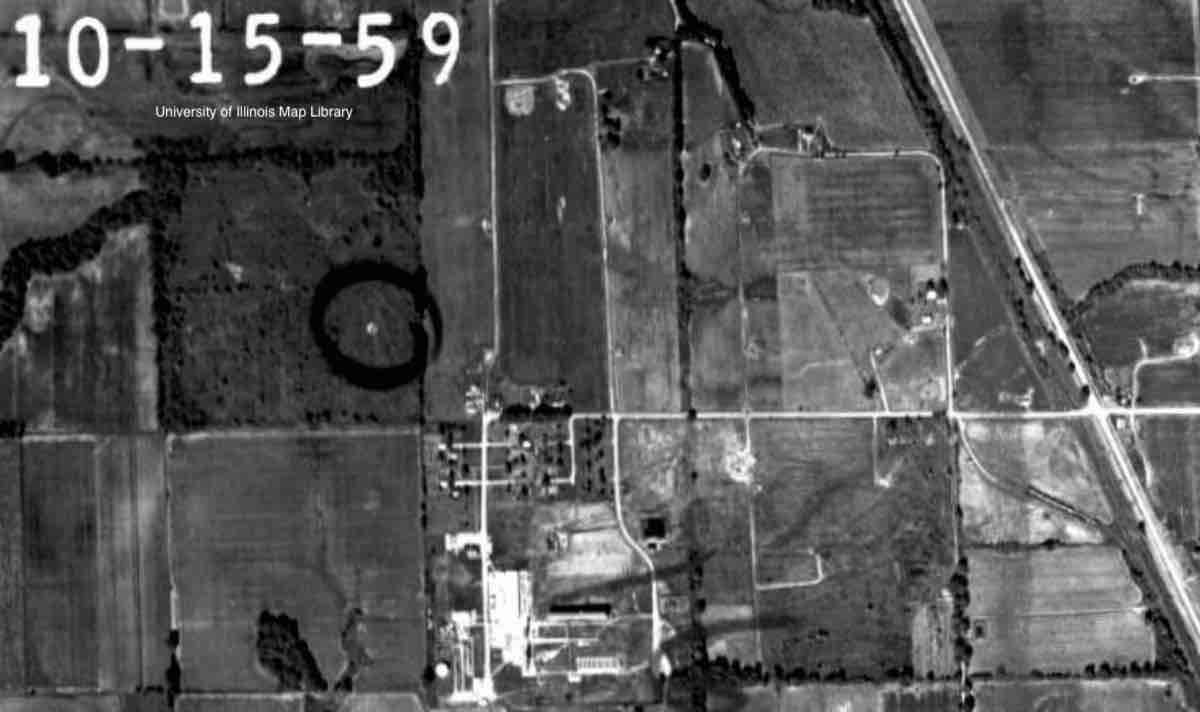 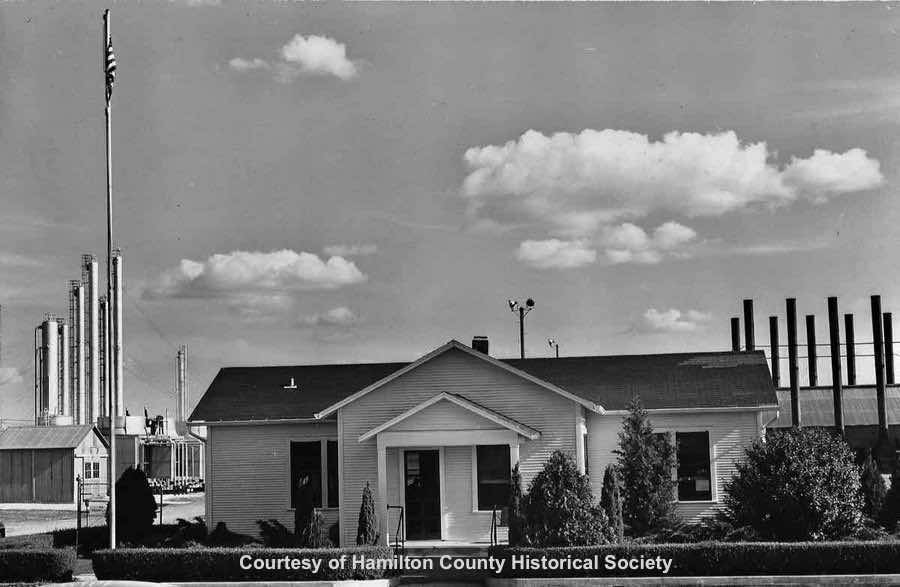 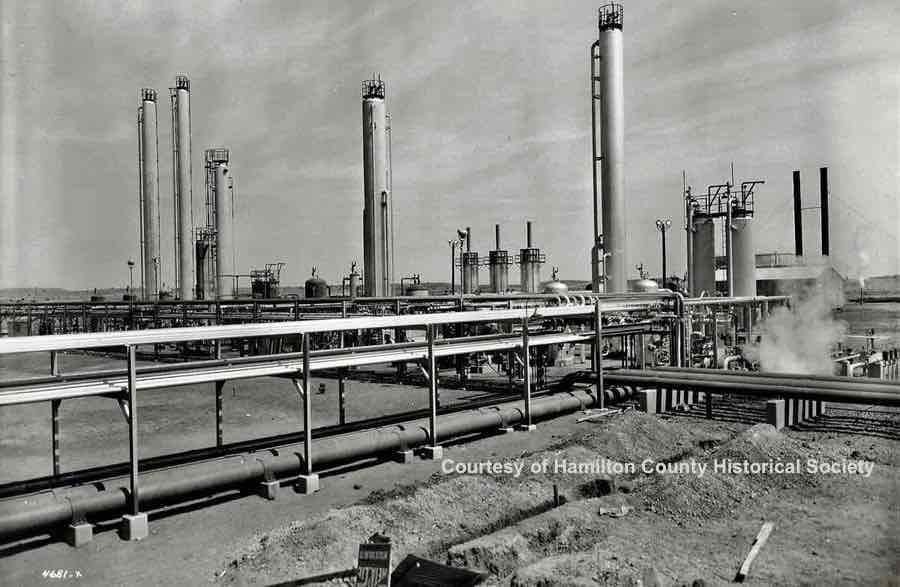 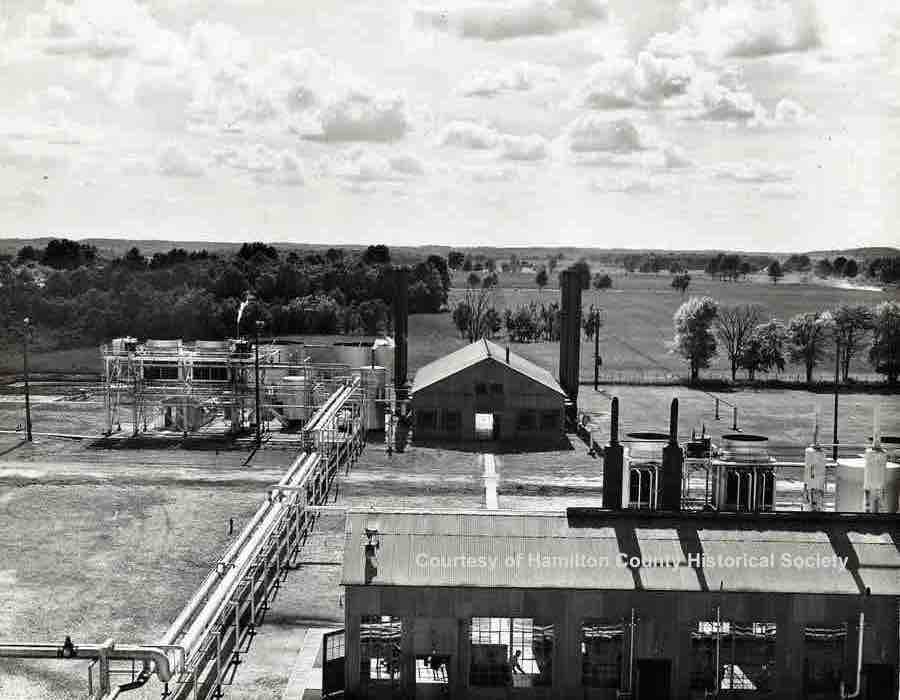 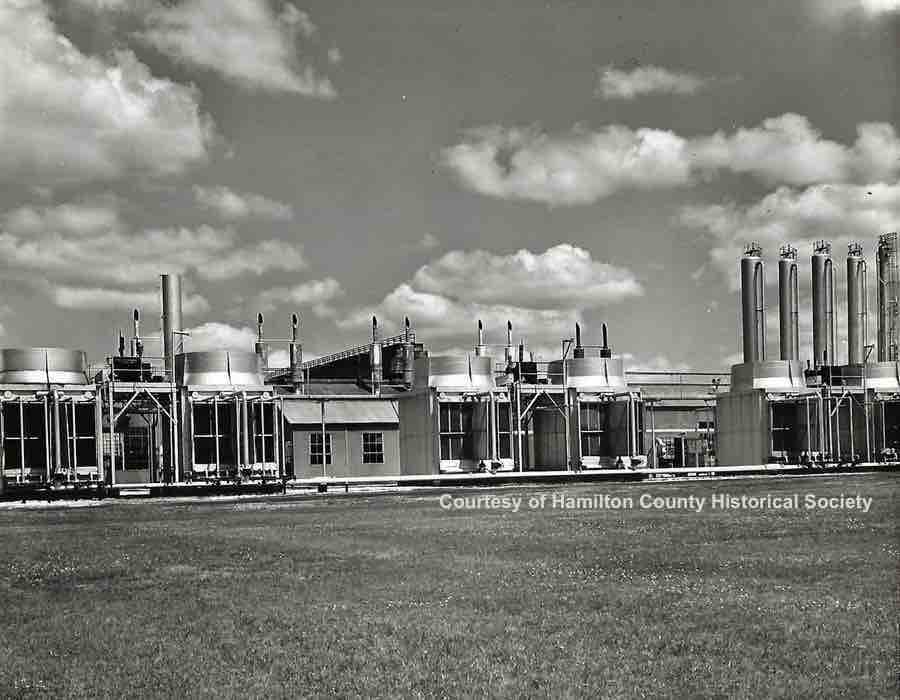 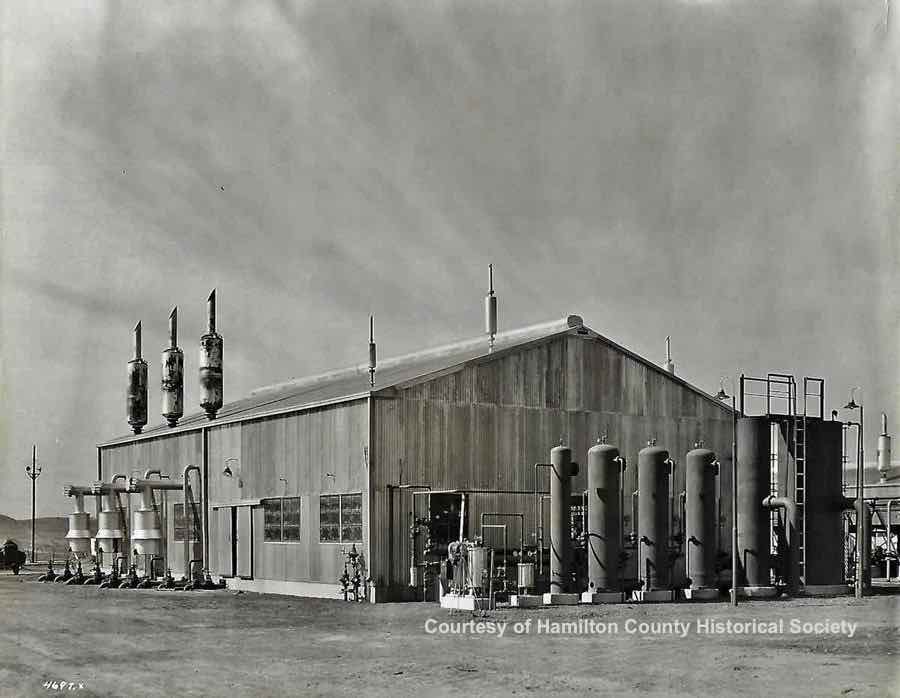 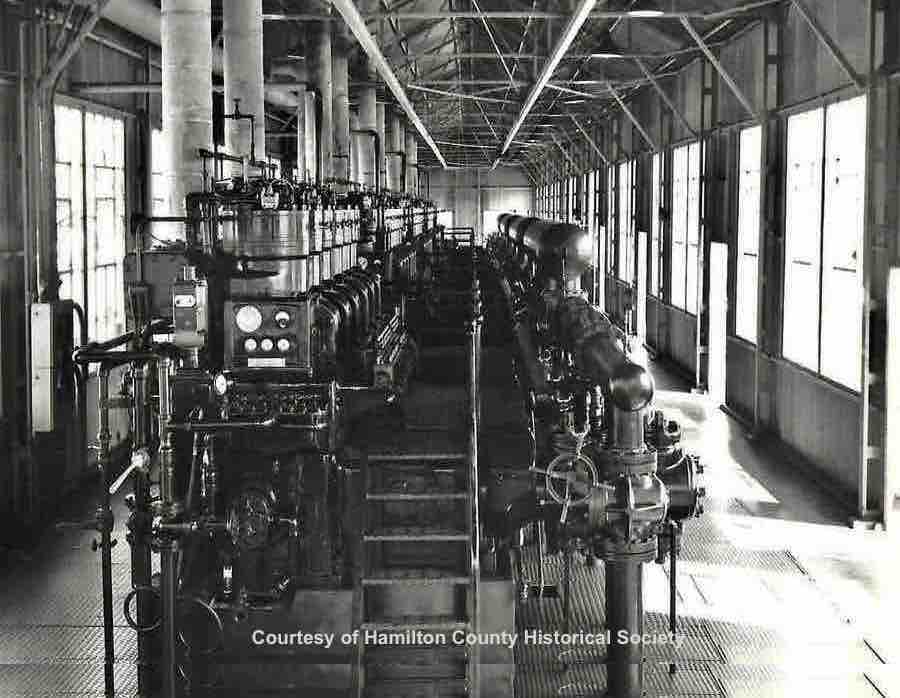 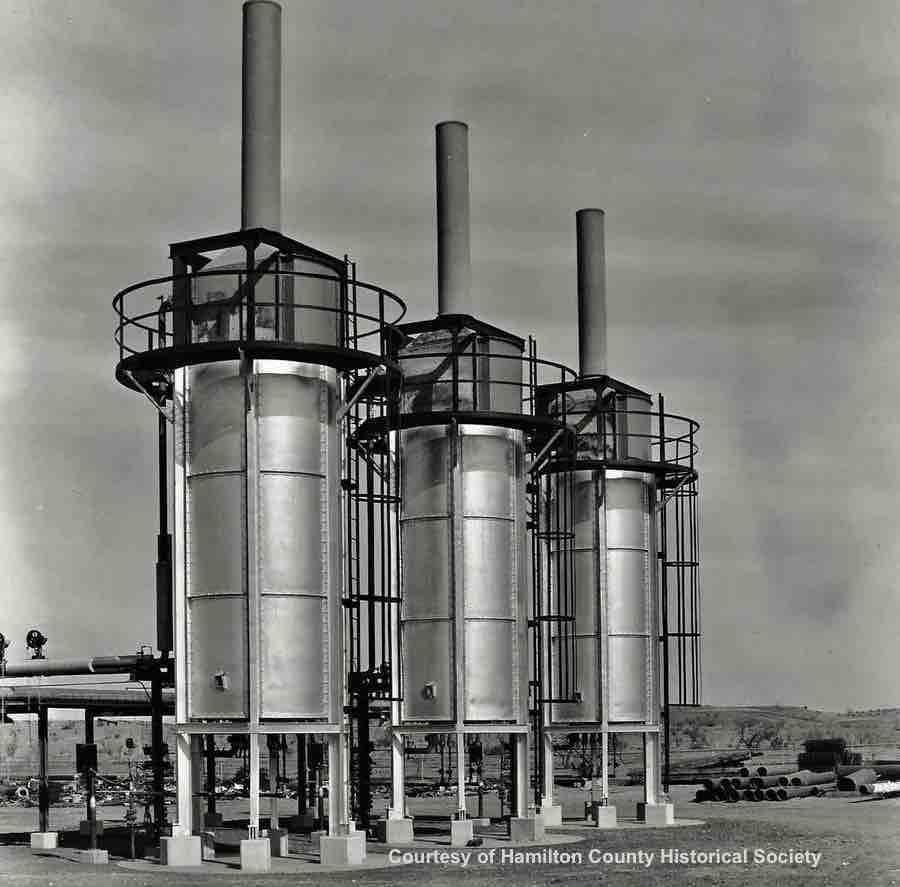 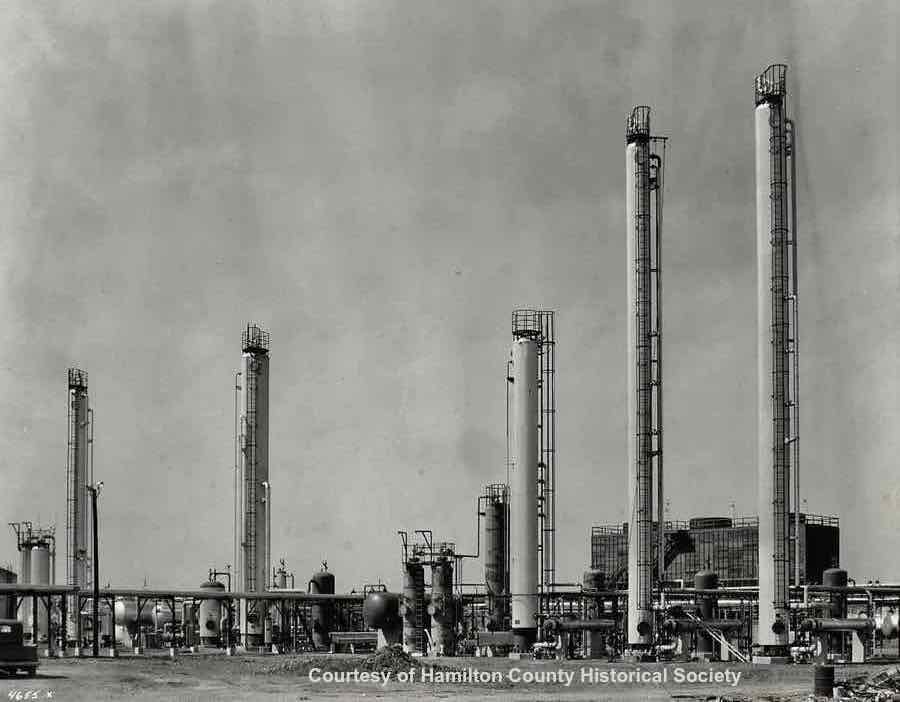 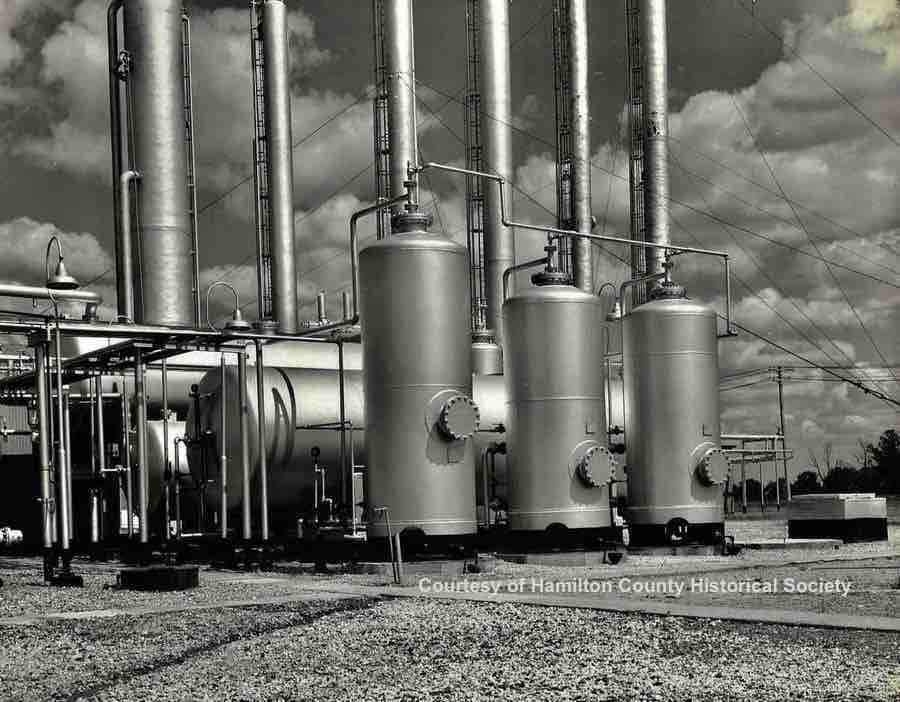 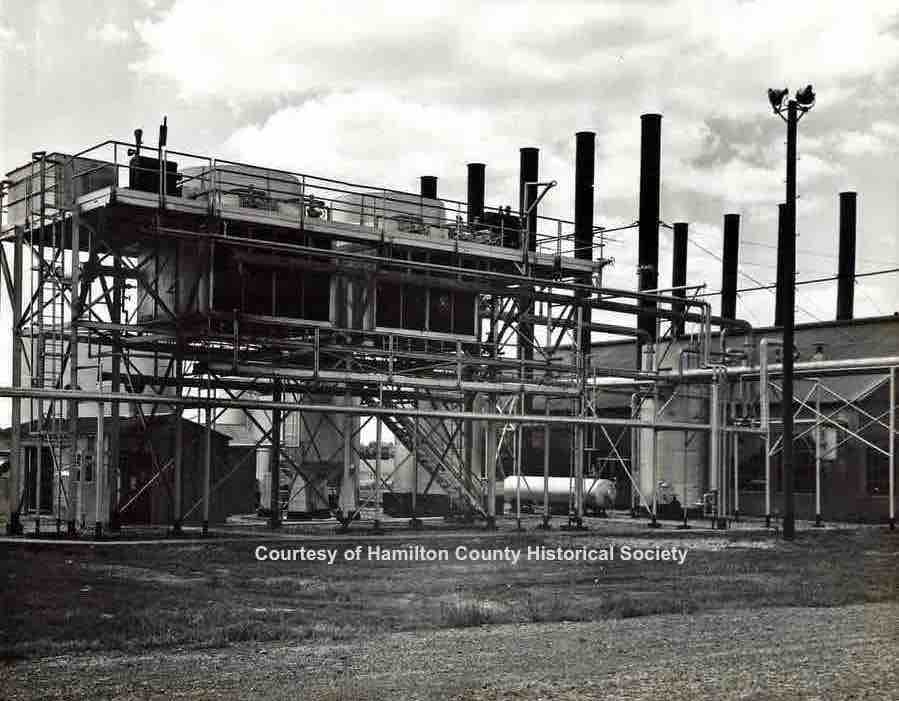 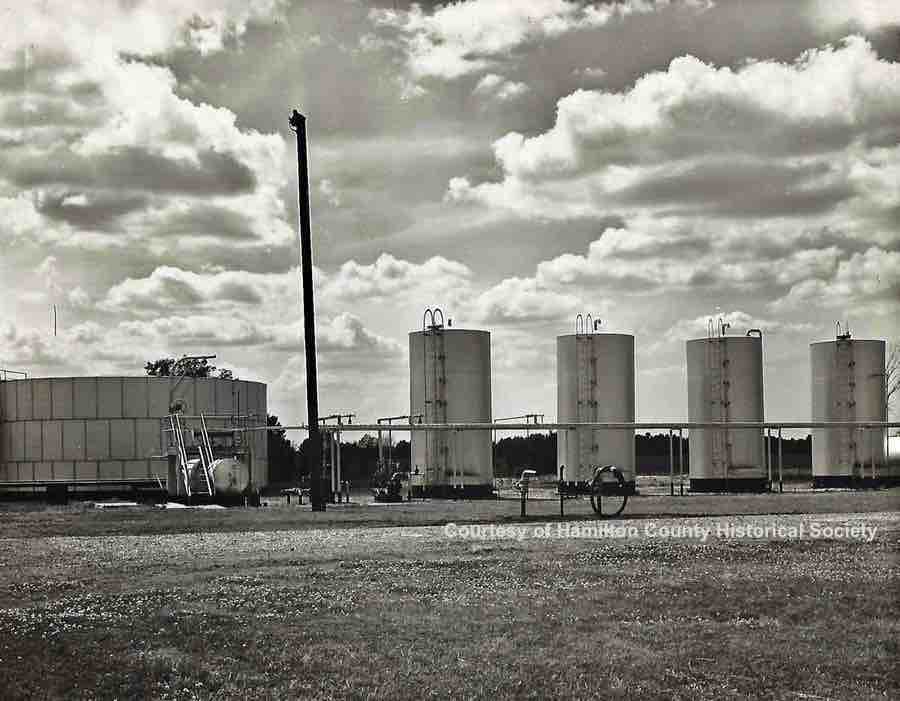 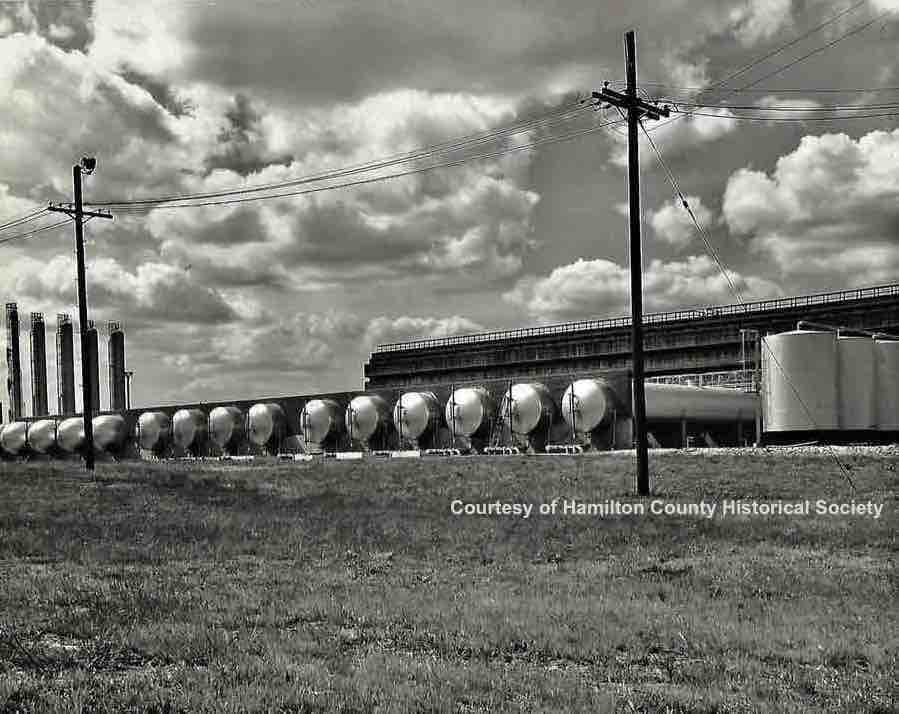 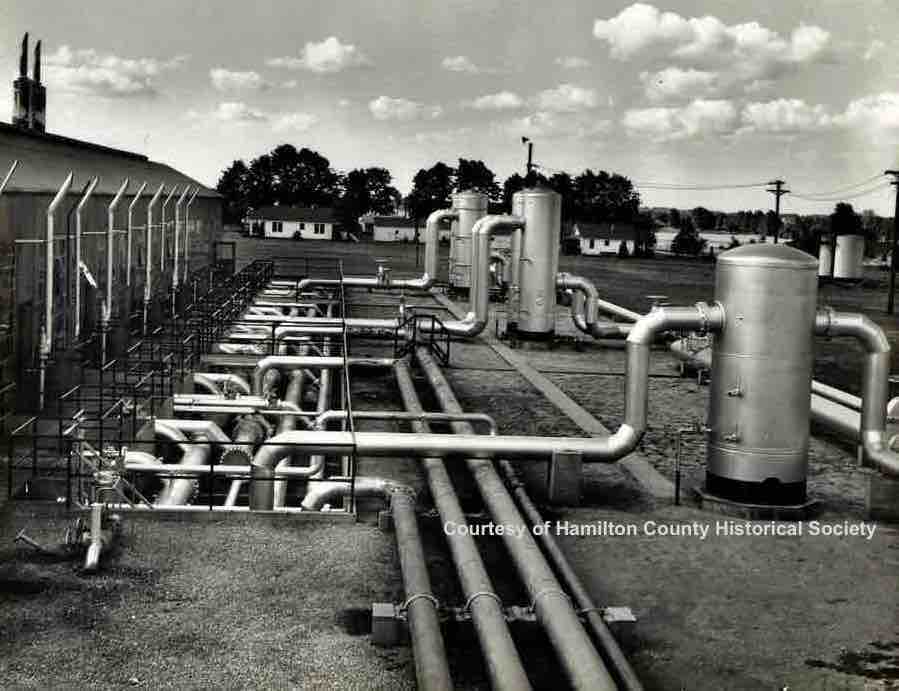 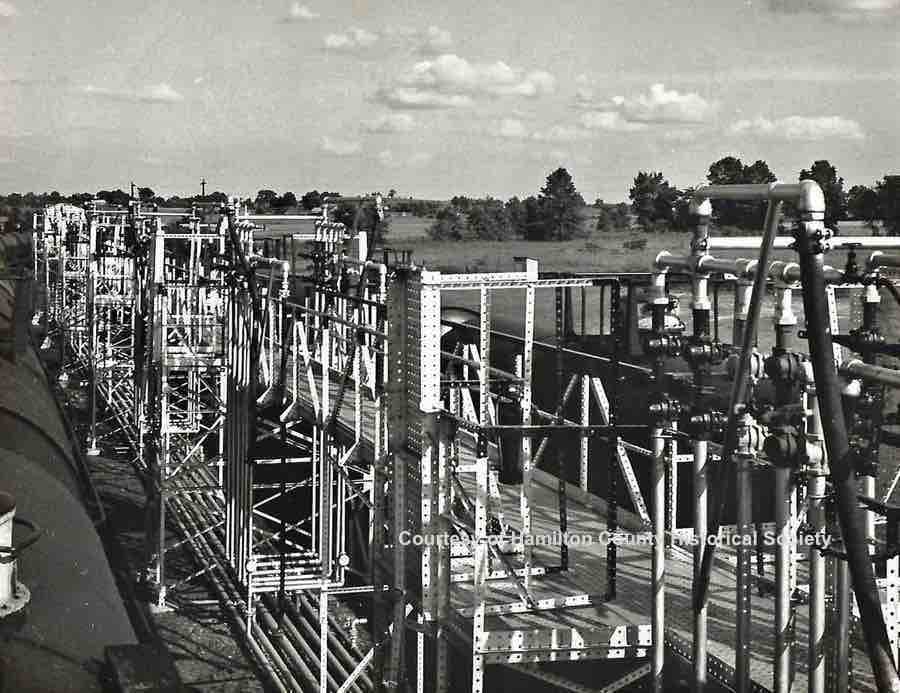 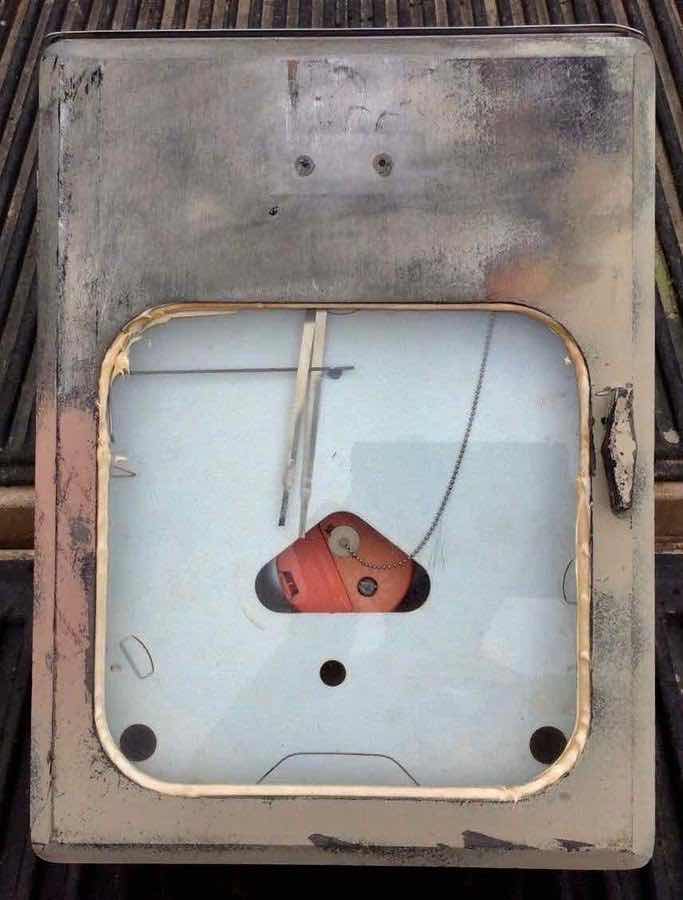 In order to pay mineral royalties to landowners, a differential pressure gas meter was installed near oil wells.  A cast iron box with a glass cover contained a clock-type meter that operated for 7 days before requiring a manual rewind.  A chart recorder logged the gas extraction.  Replacement of a paper disc occurred weekly.  Black and red marker pens contained enough ink for several weeks.  A pressure gauge was located on each side of the meter. 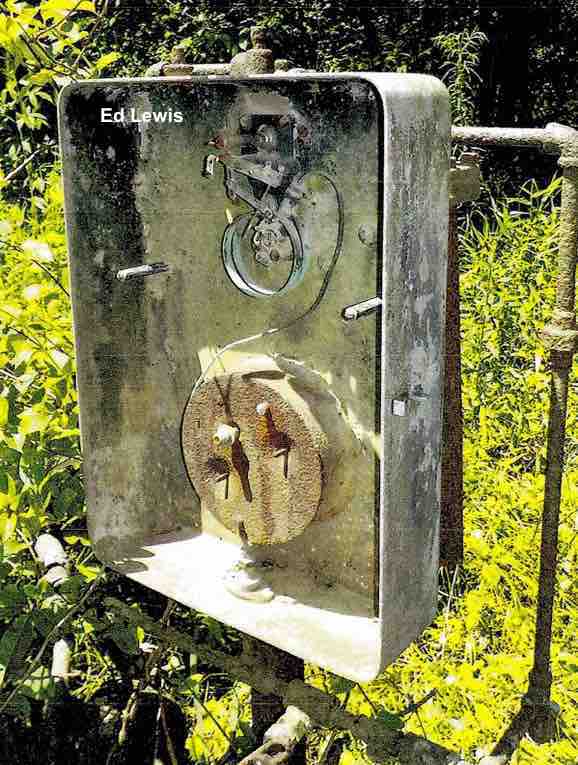 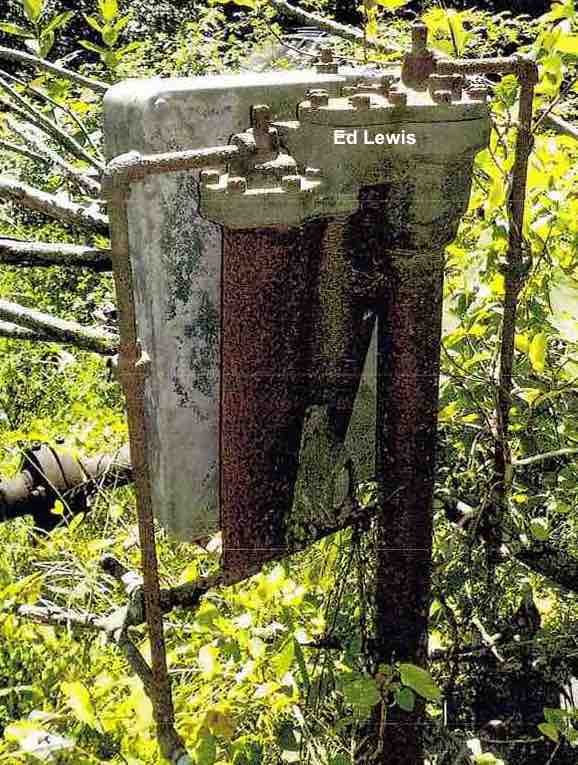 The meter was connected to an orifice installed in a meter loop.  The size of the orifice was related to the rate of gas flow.  If the volume of gas flow changed, a different orifice could be used to ensure the landowner received proper compensation.  The orifice was contained in a flange at the center of a 10 foot section of pipe approximately 3 feet from the ground.  Each end of the pipe had a shutoff valve near the ground that enabled replacement of the orifice. 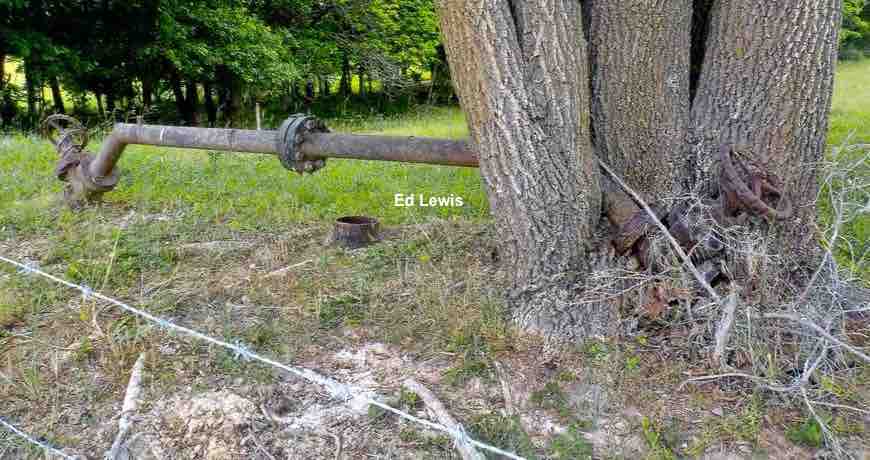 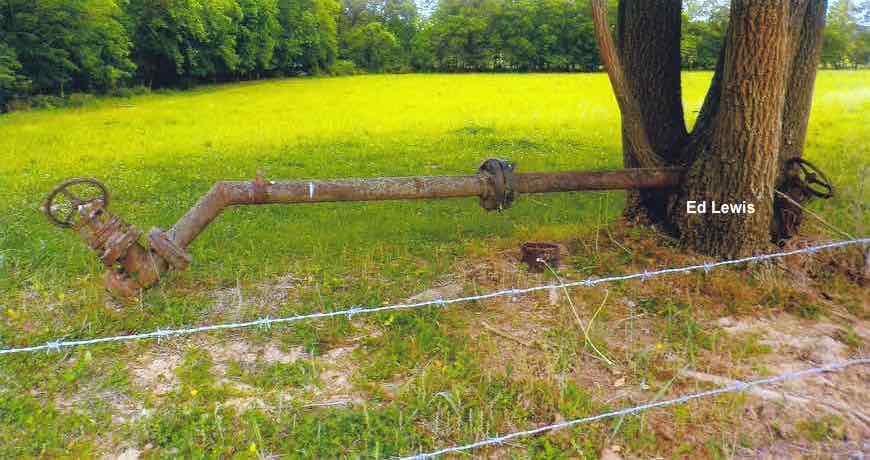 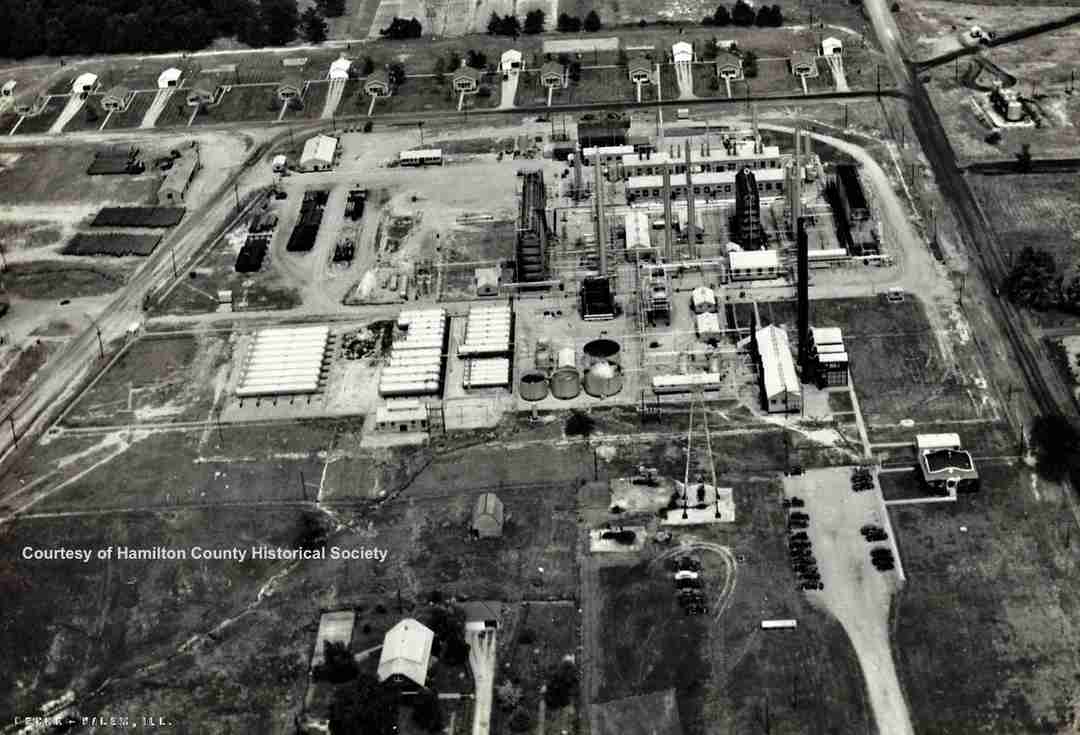