Many American serviceman never return home from conflict abroad.  Five Mayberry Township Veterans have been killed in action (KIA) and two declared missing in action (MIA). The American Battle Monuments Commission operates and maintains cemeteries worldwide for veterans buried overseas.  There are two men with family from Mayberry Township that are buried in Belgium at the Ardennes American Cemetery and one is on the Netherlands Wall of the Missing at Margraten American Cemetery.

Ardennes Cemetery is located in Neuville-en-Condroz, Belgium.  According to Wikipedia, the United States Army 1st Infantry Division liberated the land that serves as Ardennes Cemetery on 8 September 1944.

If you have information on these other Mayberry Township veterans killed or missing in the line of duty, please contact me and their information will be added.

Photos of the Ardennes American Cemetery and monuments for Wilburn Farris and Kenneth Miller have been graciously provided by Dominique Potier, a Belgium soldier.

Frank Gubbels from Holland photographed Curtis Alldredge's name at the Wall of the Missing.  Both Dominique and Frank sent photos of the Netherlands American Cemetery and Memorial.

Their kindness is greatly appreciated. 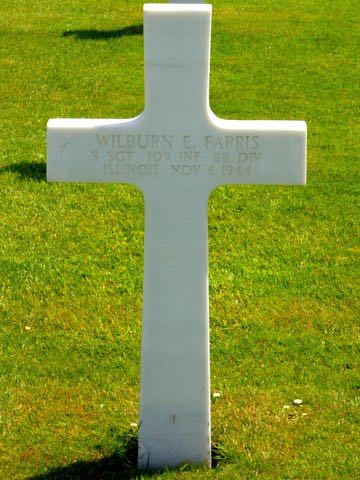 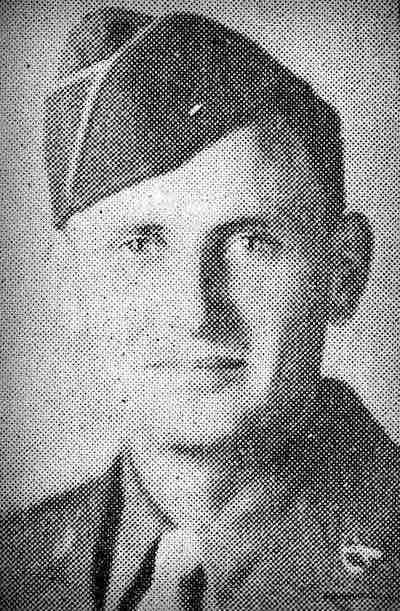 Wilburn E. Farris was killed in combat on 11/6/1944 at the Hurtgen Forest, Hurtgen, Germany.  The weeklong battle from November 2 - 9, 1944 was among the costliest division attacks of the war for the U.S. Army with casualties exceeding 6,000.

He was awarded the Bronze Star and Purple Heart.

Wilburn's remains were found in Hurtgen and he was registered as unknown soldier X-5379.  He was identified by research facilities at Ardennes American Cemetery, Neuville-en-Condroz, Belgium.

His sister and parents are now buried at New Prospect Cemetery in Mayberry Township.

The Fields of Honor Memorial Record for Wilburn Farris. 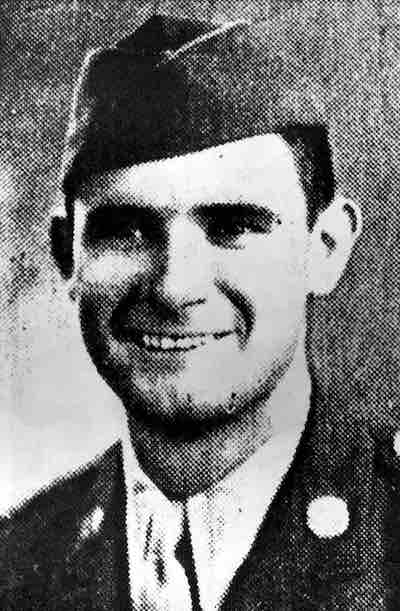 Kenneth J. Miller was killed in combat on 1/4/1944 while serving as Left Waist Gunner aboard a B-17G bomber, serial number: 42-3494, during a mission against the submarine base in Kiel, Germany.

He was awarded the Purple Heart.

Kenneth was buried at Garrison Cemetery, Kiel Field, XI, Grave No 59, by the German military on 1/8/1944 at 1100.  After the war, he was moved to Ardennes American Cemetery, Neuville-en-Condroz, Belgium.

His mother was Mrs. Julia Vianna English. The English family lived at Feakeyville in Mayberry Township, IL.  His father, Julius Miller, had passed away in 1921.  Both are buried at Big Hill cemetery alongside a memorial for their son Kenneth.

Kenneth's memorial monument at Big Hill can be viewed from the Veterans Memorial page by searching for the cemetery name.

The Fields of Honor Memorial Record for Kenneth Miller.

Details of Kenneth Miller were found in the Missing Air Crew Reports of the U. S. Army Air Forces 1942-1947, The National Archives B-17 Master Log - David Osbourne 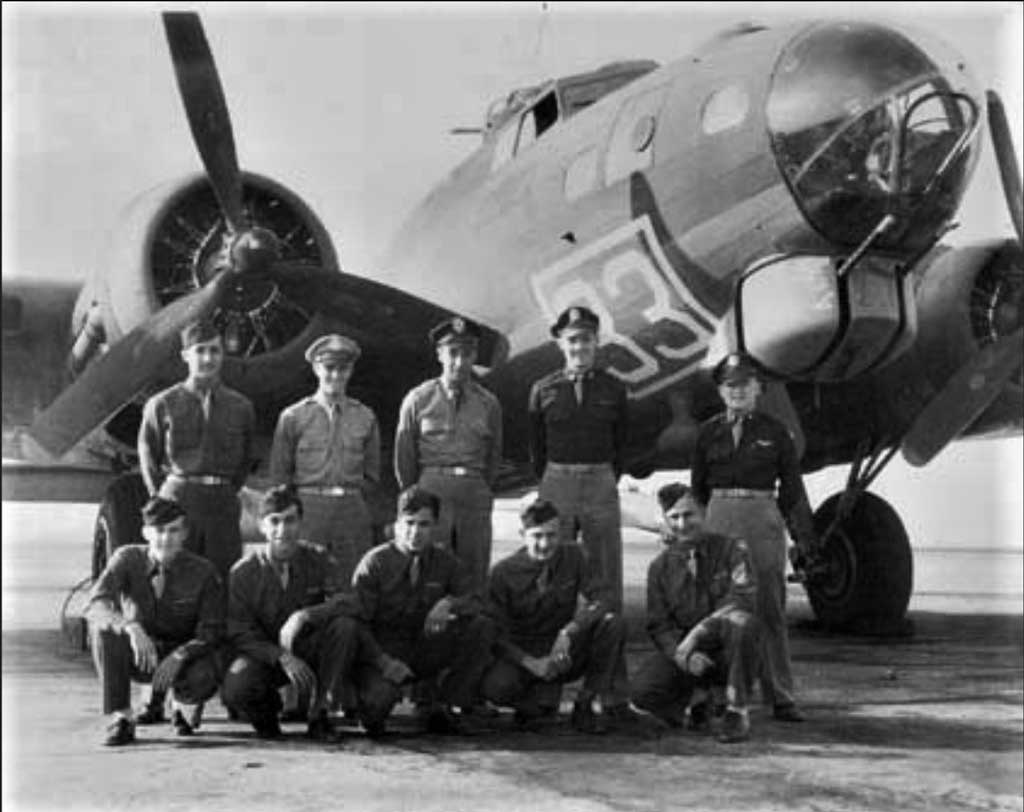 Kevin Miller's plane according to a European history website.

Ardennes Tablets of the Missing 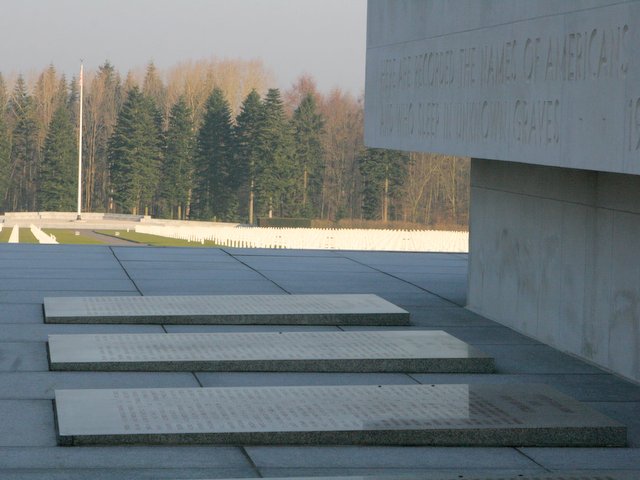 463 names are engraved in the granite Tablets of the Missing. 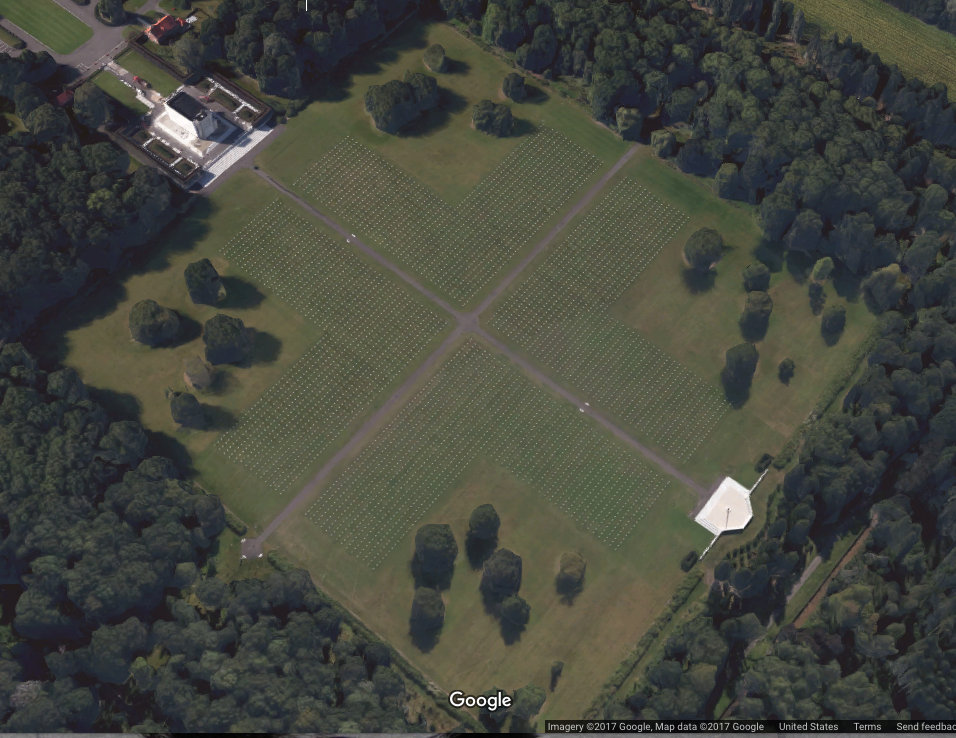 The Greek cross formed by over 5,300 monuments can be seen from a Google Map aerial view. 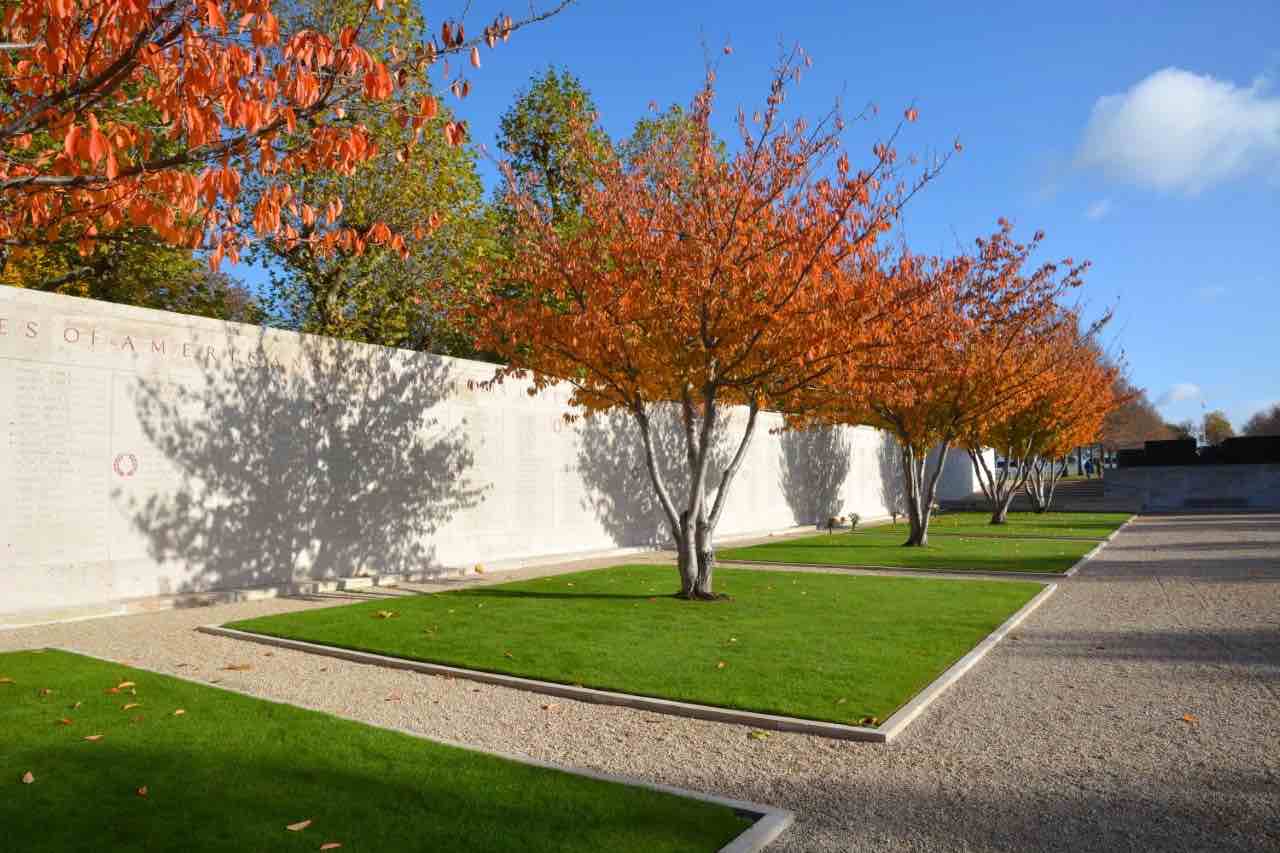 Curtis C. Alldredge was declared missing on May 12th, 1945 in Germany, 4 days after Victory in Europe Day.  His unit was the 355th Engineering General Service Regiment, Company D.

The book "Bridging the way to victory: with the 355th Engineers” states that from 8 May 45 to 8 Jun 45, Charlie & Delta Companies were engaged in reconstruction of the railroad line from Wuntsdorf via Nienburg, Verden to Bremen. In the opening pages, Curtis Alldredge is listed as one of the unit casualties.

I found the records for Curtis at the St. Louis Archives. His was one of the few that survived the fire at the facility. The pages had burn marks around the edges. His unit was constructing a railroad bridge at Verden over the Aller River. He was lost in the river and his body never recovered. Private Alldredge was awarded the Bronze Star. He had been in Germany less than a month and in Europe less than two. The Army conducted an investigation after the war but no new details were discovered. His father passed away before the investigation was finished. His mother passed away five years after her husband. My aunt said that they were both profoundly impacted by the loss of their son.

His name is engraved on the Netherlands Walls of the Missing.

His parents were Madeline and Ben Alldredge and siblings: Madeline, Gladys, Elsie, Albert, Laura, William, Silas, and James. The Alldredge family lived north of the Jennings School in Mayberry Township, IL across the field from my Aunt Dorothy and her husband Lige.  His parents are buried at Powell Cemetery east of Norris City alongside a monument in memory of their son Curtis.

Curtis' memorial monument can be viewed from the Veterans Memorial page by searching for the MIA veterans. 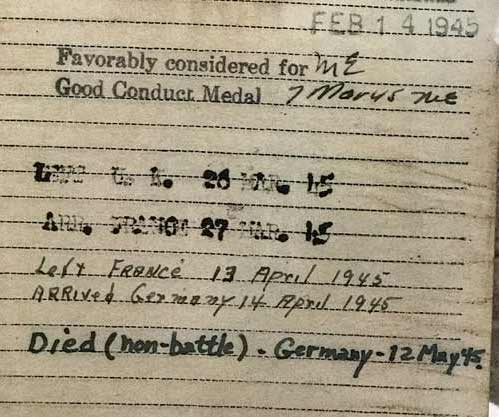 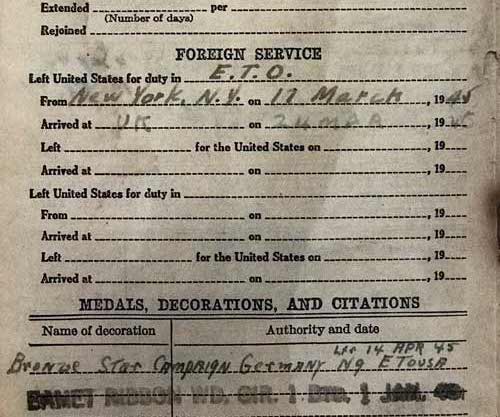 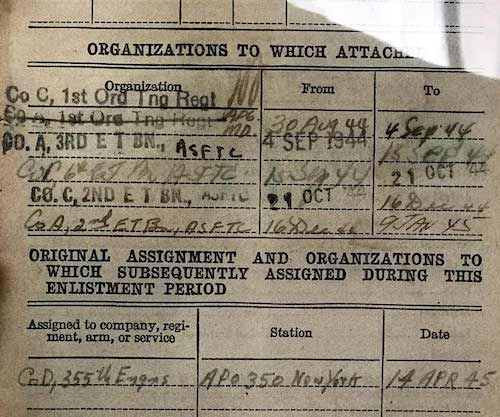 Margraten Walls of the Missing 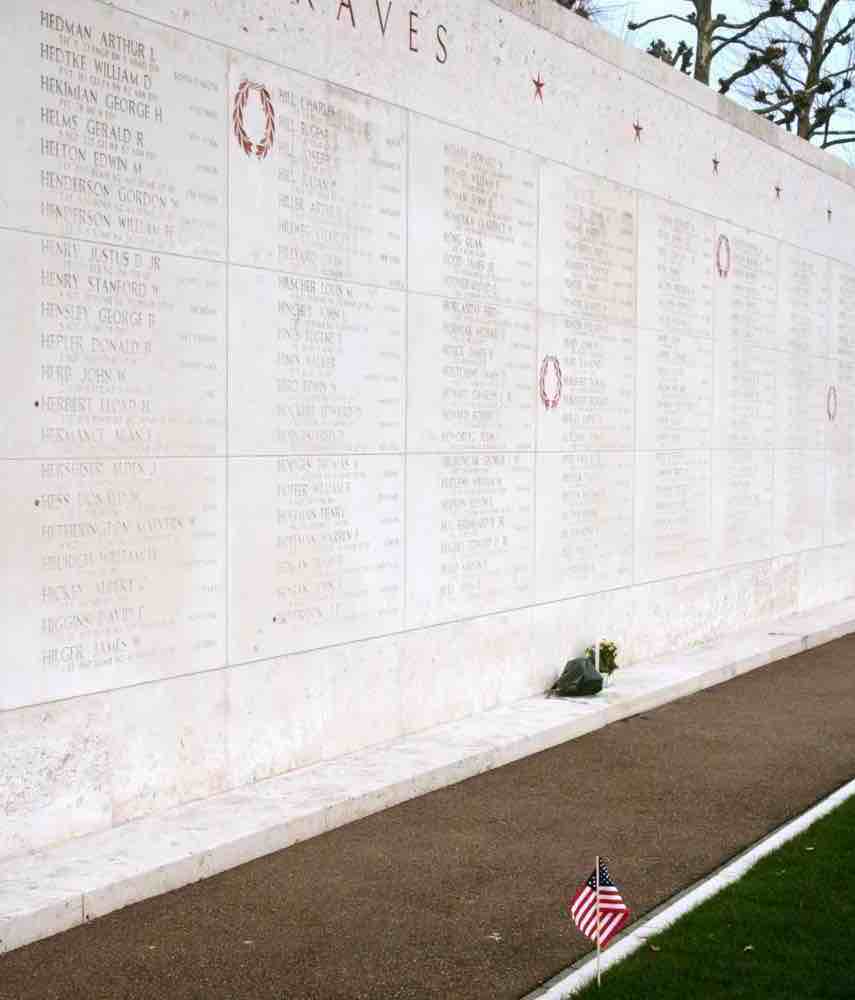 1,722 names are engraved in the Walls of the Missing. 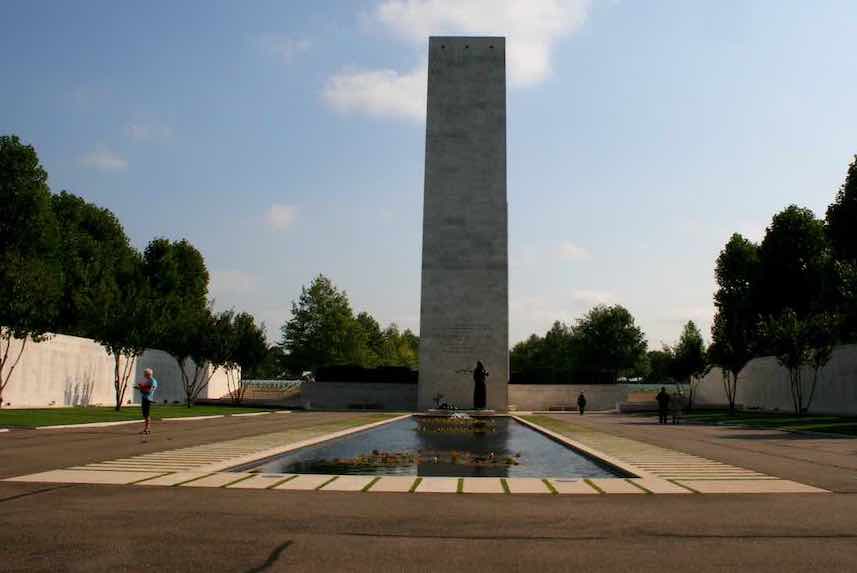 The Court of Honor and reflecting pool are flanked by the Walls of the Missing.  The burial area is located beyond the court where 8,301 soldiers lay at rest.

According to the American Battle Monuments Commission fact sheet, the US 30th Infantry Division liberated the site on September 13, 1944.  The Netherlands government granted permanent interment with no fees, taxes, or payment.

Private Eugene Jordan was declared missing in Korea on July 19, 1950 while serving with the 19th Infantry of the 24th Division of the US Army.

The details of his military operations have not been found. He was awarded the Purple Heart and Bronze Star. He had also served during World War II in Japan.

His parents were Charles Jordan and Harriet Jordan Wheeler. Both are buried at New Prospect Cemetery with their son. Private Jordan's father passed away in 1928.

Eugene's monuments can be viewed from the Veterans Memorial page by searching for the KIA veterans.

The B-17G bomber, serial number: 42-3494 and crew were members of the 325th Bomber Squadron, 92nd Bomber Group of the 8th Air Force of the US Army Air Force stationed at Royal Air Force Base, Podington, England.

According to Missing Air Crew Report #1961, 10 men were killed in action after being hit by anti-aircraft batteries on 4 Jan 1944 at 1145. The bomber had departed AAF Station 109 in England with 569 aircraft. After encountering flak over the target, the plane crashed near Oppendorf on the Schwentine near Schoenkirchen, Germany.